DC LEAGUE OF SUPER PETS: THE ADVENTURES OF KRYPTO AND AC

Suit up as super-dogs Krypto and Ace and get ready to soar through the skies and
protect the streets of Metropolis in this pet rescue adventure inspired by the movie!

Rescue animals along the way, before they’re locked up in LexCorp Zoo and prepare for the ultimate battle with Lex and his high-tech War Suit.

Being a Super-Pet isn’t all ruff and tumble. Pamper your furry friends at the Adoption Center to help
them find forever homes and receive special rewards. And hang out with your pals Chip, Merton, and PB to learn superpower upgrades.

BLAST THE BOTS
Protect the streets of Metropolis, avoid the obstacles, and take on the evil LexBots

CHOOSE YOUR HERO
Play as laser-eyed super-dog Krypto or Batarang-powered Ace. Change your hero and powerups to experience missions in new ways.

SAVE THE STRAYS
Pamper and rehome the animals you save at the Pet Adoption Center and get super rewards. 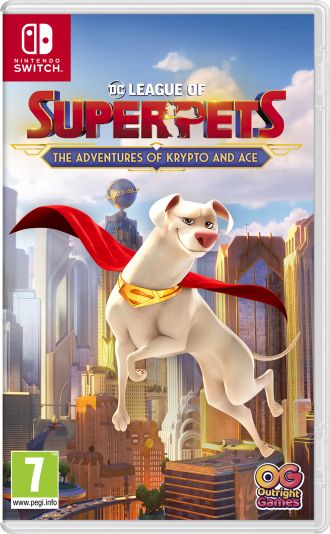