In the 80s and early 90s, the “Super Ninja-kid” series was one of Jaleco’s most prolific franchises, with several highly successful games.

“Ninja JaJaMaru: The Great Yokai Battle +Hell” is the must-have for everyone who loves the iconic Jump & Run franchise or wants to dive into it for the first time ever. This newest game introduces new controls and gameplay mechanics to the series. JaJaMaru and friends will face against the largest yo-kai army invasion in history! There are more than 20 playable characters with various abilities, including returning yokai from the series plus the newly debuting JaJaMaru family and more. By collecting the "Golden Beads" and "Souls" that drop from defeated enemies, you can unlock new playable characters. There is also support for single-screen local two-player multiplayer.

Restored with love“ is invariably our motto at ININ, but this time it is particularly applicable to "Ninja JaJaMaru: The Great World Adventure“ a GameBoy title from 1990 that sees the light of day in colour for the first time ever! It runs perfectly on modern consoles – and is included in this Deluxe Edition!

Over the decades, there have been several attempts to bring single games from the series to Western audiences as well. Now, for the very first time, the most important and legendary games in this series are available to all international fans!

•    A truly legendary series deserves one legendary collection!
•    First Western release in the series
•    Restored with love and additional features
•    The Great Yokai Battle +Hell with local 2-player mode and more than 20 playable characters
•    GameBoy title from 1990 in color for the first time in history
•    The Great Yokai Battle (2022) includes the +Hell update!

Six legendary games in one collection: 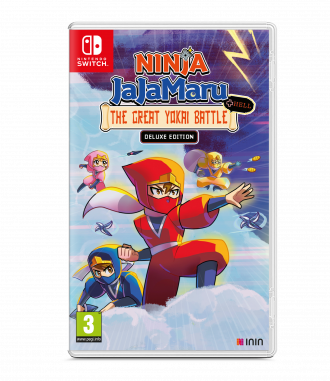